One day, I went yet again to the State Hermitage Museum. It was well before opening and while I stood taking photos of the huge expanse of Dvortsovaya Ploshchad, Palace Square – the central heart of Saint Petersburg – a tabby cat wandered across the warming cobbles, brushing confidently against my leg. The cat perched on a sign bearing opening times, grooming itself. I had just met one of the famed Hermitage cats. 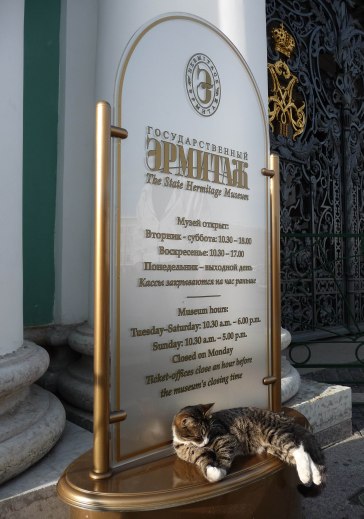 Cats feature as creatures of the city in Birch. In Saint Petersburg, they are symbols of how the city is faring – their happiness is the city’s happiness.

I thought that knowledge of the museum cats was some special mystery, known only to those who came to visit. In reality, journalists from around the world have been granted special access to the forbidden places these cats inhabit. Some of the best descriptions are included in the links at the end of this post. It is strange that an expanse of utility areas, dark corridors and courtyards, smelling of cat urine, holds so much wonder. The director of the museum has quipped that at times there is more interest in access to the cats’ private domain than in the masterpieces on display.

The existence of the cats is tied to the history of the palace itself. In 1745 the Empress Elizabeth Petrovna, daughter of Peter the Great (founder of Petersburg), gave a decree that the best, brightest and strongest cats were to be delivered to the palace to rid it of mice and rats. The tradition continued with Catherine the Great, who was known for her love of the Russian Blue breed but used castrated strays in the continued effort to cull vermin. Only the siege of Leningrad interrupted the existence of the museum cats, the tragic nine hundred days when, surrounded by invading German forces, the city’s human inhabitants were forced by starvation to eat anything remotely edible at hand. This included boiling down leather, and eating their pets. When the blockade was lifted and the war was over, cats were sent in from all over Russia to fight an army of rats – the only species to have thrived during the siege. The return of the cats was the return of hope for the city.

In more recent history, the museum cats have experienced an altogether different issue: overpopulation. As in any major city, the existence of stray and abandoned animals are an awful side-effect of human companionship. Today the museum is (officially) permitted to have a total of fifty cats. Most articles cite at least seventy, which the volunteers, more like official staff, who look after the cats sheepishly admit have been smuggled in off the street to be given a second chance.

The cats inhabit an alternate subterranean world in the Hermitage. There is a cat graveyard in an isolated courtyard, special kitchens for food preparation – with meals tailored for each cat’s taste, a veterinary area, and areas customised for the cats, such as hot water pipes topped with blankets and beds. Holes are cut into steel doors and grates to enable the cats to roam the Neva Embankment, where they wander during the day. They are not allowed in the exhibition spaces, though this does happen on occasion and they have to be removed by museum staff, with varying degrees of difficulty.

The purpose of the cats officially remains the same: to kill mice and rats, yet the museum employs a pest service, and the cats have become notoriously spoilt and lazy. The official justification is that the cats serve as a deterrent.

Some of the cats live part-time at the Cat Republic café. In looking back at the photo of the cat who greeted me that morning, he looks to be Maru-do-eron, “named after Japanese armor. He is very naughty… he likes to fight with other cats”.

On other trips to the Hermitage, I saw and met other museum cats. Some were in the public courtyards, greeting tourists, some sunned themselves outside the galleries. They are a species completely unto themselves, oblivious to their legacy and free.

View all posts by DashM