I’m tidying up this review from a jumble of notes scrawled while listening to the audiobook edition of The Power. More often than not, I post reviews after a significant procrastination mulling-over period. In this case, I couldn’t remember the last time I was so utterly, maddeningly in awe of a work. The premise of Naomi Alderman’s revelatory work is this: what if the women of the world, regardless of creed or socio-political position, were in possession of an innate ability that suddenly rendered them the dominant gender?

The Power is described as dystopic fiction – which it is. If a particular section of the population assumed control over another segment of the population, resulting in violence, disenfranchisement and systematic oppression – what is it but a dystopia?

My notes originated from a sense of sad yearning. I began to desperately wish that the mutation of the women in The Power (the ability to generate a form of static electricity, and the ensuing capacity to inflict pain at will) was a real thing, a rite of passage as natural as menstruation – but not for me, and not even for most women and girls I know. Instead, I wished it for those in daily, commonplace danger.

Even a cursory glance at figures of violence against women and girls worldwide is staggering. Numbers on child marriage, intimate partner and sexual-based violence are sickening. Depending on the nation studied, generally a third of women experience physical or sexual violence at some point in their lives – and this is the kind, neutralised statistic. In many places around the world, rape and assault is a near assumed expectation of a woman’s life experience.

Some Goodreads reviewers are abhorred at the content of The Power. For example, in the Q/A section: 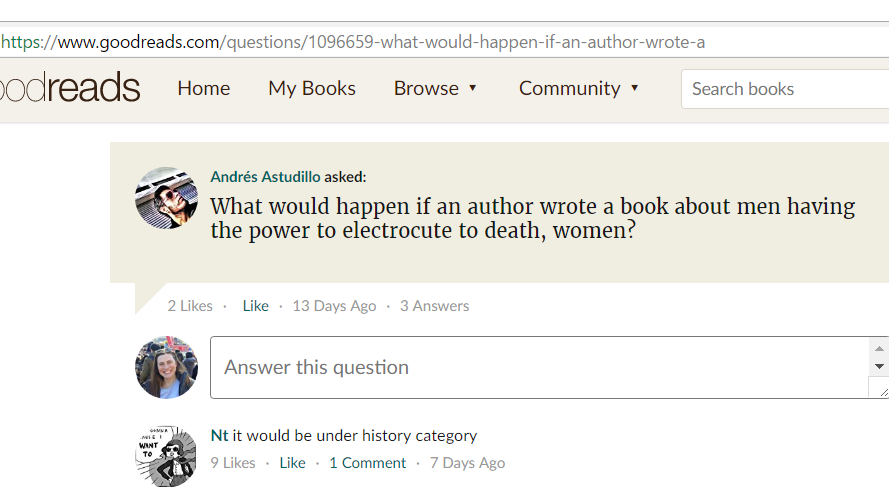 The frequency with which reviewers criticise the atrocity of the rape of men in the book is also worth consideration. In contrast, the rape of women in art and literature is par for the course, it is something that just happens to women. The threat to one major character, the Nigerian journalist Tunde, made me examine my own prejudices in what I find discomforting to read. I was initially set against Tunde as a major protagonist in this book, and dreaded him becoming fetishized as some kind of exotic specimen. However, in the course of the novel, as he finds himself in the newly-formed country of Bessaparra (formerly Moldova) he is the very image of vulnerability – isolated, different, and male.

In the real world, women and children subjected to sexual slavery and assault do not possess an evolved ‘skein’ along their collarbone which they can use to harness and discharge electric energy. In The Power, skeins can be read as allegory, analogous to other rise-up messages in the book (women sharing power and learning the skill from other women etc.). In the real world, victims of gendered violence are being failed on a daily basis by law and fleeting consciousness. A Delhi woman in The Power (a city in which 92% of women reported experiencing sexual violence in public spaces, according to a 2012 UN report) describes public outrage at violence against women as a wave, “only there for a moment.” I couldn’t help but remember the brief worldwide indignation of the 2012 gang-rape and murder of Jyoti Singh. And violent death and assault, of course, happens even in ‘safe’ places like Australia (see Destroy the Joint).

The Power features many examples of insidious misogyny, including a forum-discussion sequence that demonstrates the kind of repugnant vitriol directed at women who align themselves with feminist causes: “feminazis… Bitches need to see a change”. While reading the book, I had an… interesting exchange at work. Alderman was influenced in no small way by Margaret Atwood, who she thanks in her afterword. I was assisting an older patron at the library, who was seeking The Handmaid’s Tale, which he believed to be a new book (there’s a T.V. series coming out, don’t you know?). In the course of the enquiry, the patron commented informed me, “‘Bitch’ is a complementary term for women now.” I had no response. He continued his explanation, enlightening me that the term stands for qualities “which some men find attractive, like bossiness”. I stammered something along the lines of, “I’m not sure most women would consider it a compliment.” He was insistent. When I told my sister the story, she suggested a better response: “Bye, bitch.” Bless.

Like The Handmaid’s Tale, The Power skilfully addresses themes without presenting some kind of didactic manifesto. There are so many quotable moments, from the stark and disturbing, to the satiric and comedic. Examples of the later include description of an unknowable past patriarchal world, cheekily referred to as “[surely] a more sexy world than the one we live in” by a female editor in the future. The Power is bookended with this exchange between a male writer proposing a revolutionary rewrite of history and a female editor/mentor. According to evolutionary psychology of the distant future, it is posited that:

‘Men have evolved to be strong worker homestead-keepers, while women – with babies to protect from harm – have had to become aggressive and violent…’ ‘As to whether men are naturally more peaceful and nurturing than women… are patriarchies peaceful because men are peaceful?’

Alderman is ruthless with the trauma inflicted on her characters in The Power, whether main protagonists or secondary figures. Without spoilers, there are depictions of a range of uncomfortable and downright disturbing subjects, from genital and bodily mutilation, rape and mass murder. While an overarching theme concerns power and its potential to corrupt, regardless of who wields it, The Power is more than an advanced examination of the switch from a patriarchy to a matriarchy. Alderman reflects on a range of gendered injustices and how they are structured. That there were missed chances for expansion in Alderman’s world might be my only major criticism. In paving the way for some 5,000 years of new history, Alderman cannot elaborate on every issue raised. I was curious about the implications of women – and men – with ‘defective’ skeins, the result of chromosomal ‘abnormalities’: a new othering. The Power also considered religiosity and the ways that those that preach peace invariably seek conflict for their own ends. Alderman includes the experiences of a range of women, including a particularly powerful moment (criticised by some as over-simplifying a complex issue) when a revolt by women in Saudi Arabia results in the destruction of vehicles on the street – signifying the end of their limited power in a setting where they are legally prohibited from a range of activities, including driving cars.

The Power made me think differently about how I am approaching my own manuscript. Currently titled Bury the Sun, I have begun to question power and who wields it, and for what purpose, as well as the regularity of violence and how it is inflicted in all its guises on women. The Power was the winner of the 2017 Baileys Prize for Women’s Fiction, and deservedly so. It will soon be a classic.