To break it down in such increments makes it sound feasible, reasonable even. Kind of. It is an invitation to write without the obligation of immediate editing judgement. All you have to do is put your head down and write one word after another. However, add in that dose of self-doubt, family visiting from the motherland for the first time since we’ve been in Australia, anxiety-ridden work commitments, long-term mental health issues – and you have a delightful recipe for “this cannot be done.”

As a workaround, I developed a plan in October. Why not cheat with a collection of short stories? These were concepts floating around in my head, a long-term list of premises waiting for exploration. Ideal for use in chipping away at fifty thousand words. But one of those stories would not leave me. It followed me to my dreams, and would not leave me in the day either. It was exciting, but also incited significant apprehension. It was a piece of historical fiction, a genre I have never before attempted. And an obscure, difficult-to-access period of history at that. Larger in scope than anything I’ve ever written before.

In terms of reading, I was inspired and heartened by three pieces of incredible literature that were unlike anything I’d ever read before – 2017 has been a great vintage for speculative fiction with a historical twist written by Australian women. Specifically, these three books: From the Wreck by Jane Rawson (reviewed here), Terra Nullius by Claire G. Coleman (reviewed here), and Storyland by Catherine McKinnon. 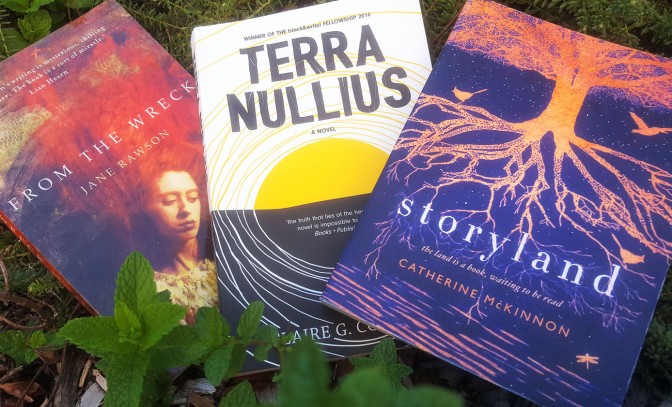 Fuelled by the courage of these writers, I connected with a writing community on Facebook, and discovered the power of the writing sprint. My general modus operandi is to sit with my laptop and complete a thousand words over several hours that shift from being elating to downright torturous. Hours fraught with procrastination, distraction and doubt. However, I managed to achieve more in singular blocks of half-sprints than in all those hours. No research, no pauses. Just writing.

And that was how I got through draft zero (because I can’t yet consider it a first draft) of the first 50K of this new manuscript. I’m excited to share more about this tentatively titled work in the coming weeks:

View all posts by DashM